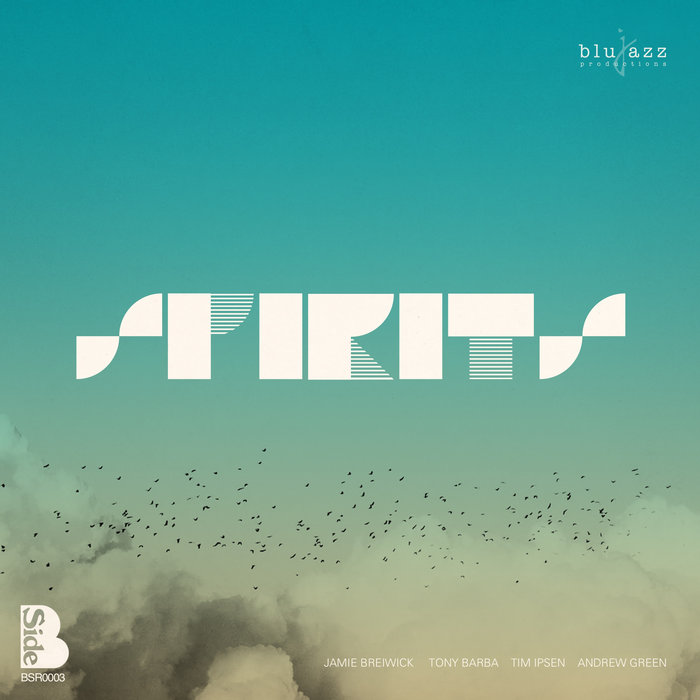 "Just a likable album that swings plenty, and expresses melodies with a care and thoughtfulness emphasizing their lyricism. Good stuff."

Open the door on the album cover and you enter the Jazz Estate, a Milwaukee club that exemplifies a venue that nurtures modern straight-ahead jazz and makes money at it. This recording was made there one night, even if the program has the well-considered sense of purpose of a studio recording.

The melody of the opening “Gig Shirt” has a slightly skewed trumpet-saxophone harmony, recalling Ornette Coleman’s classic/radical quartet, which certainly influenced the album's piano-less instrumentation. The theme bodes well for a musical departure, especially in its expansive rising last notes.

This journey’s departure mean’s arrival at many musical ports, including some adapted pop-rock. “I Will Follow You into the Dark” by Death Cab for Cutie frontman Ben Gibbard, is a mournful yet oddly resolute melody. Breiwick’s muted trumpet sounds playful, as if he’s wooing a young woman with a joke. The rhythm players burble along in the same coy spirit, lifting the interpretation’s insouciance and the band ends with an exquisite exhalation.

“Safe and Sound,” by country-pop artist Taylor Swift, is another strong and pliable melody that tenor saxophonist Tony Barba builds from close, pinprick-sharp variations until he unfurls some Joe Henderson-like flag-waving. Breiwick’s own “Little Bill” is a funky, amiable tune that honors the memory of his Grandfather Bill and also refers to the cartoon of the same name, which Breiwick’s children love to watch. “Dad” adopts a slightly gruff tone and Barba is almost flippantly offhanded, befitting the sit-com mood.

This band has a svelte-but-sure grip on the harmonic and rhythmic tension of “Capricorn,” a Wayne Shorter theme that seems to move in two directions at once while flowing as a seamless melody -- characteristic of Shorter’s ineffable compositional genius. If that sounds like a chops-busting practice-room etude, “Capricorn” rises like an indelibly hummable melody. The band swings hard out of the gate, as Barba plunges in with pithy Shorterisms -- slanting shards, open-throated exhortations and quotes of the sorcerer-like theme. Breiwick shifts gears, then creeps into a softly growling, splattered tone that recalls Don Cherry. He’s clearly finding his own forward-pushing place in the trumpet tradition. Bassist Tim Ipsen steps in like a heady middleweight contender, with a sly combination of punchy harmonic intervals.

The aphoristically titled “Walk through Daydreams, Sleep through Nightmares” reflects Breiwick’s magnanimous depth as a member of the jazz community. He leads two jazz bands, including a more pop rock-oriented one called Choir Fight. He’s also an educator, organizer and all-around go-getter, having co-founded Milwaukee Jazz Vision, a musician-run organization that promotes the local jazz scene, especially with an excellent website: mkejazzvision.org. This tune is by one of Breiwick’s own former students, Philip Dizack, a fast-rising young trumpeter of uncommon lyrical strength and compositional maturity. Breiwick acknowledges that crafting a songfully expressive melodic line is a primary concern of his. “I believe the album’s aesthetic intent points to a depth of feeling in the music,” he says. “Beyond technique, which is obviously hugely important, emotional communication is a priority.”

“Walk” opens with swelling mallet rolls and cymbals. The two horns resound like one voice, or mind, experiencing a revelation. Then everyone pulls back, as if in a slight state of awe, to contemplate the implications of the eureka moment. One imagines a lightning bolt having struck the narrative consciousness right at its precipitous leap from daydream to nightmare. It recalls John Coltrane’s more pensive lyrical moments in his late years, when he pushed the spiritual-empowerment envelope like the shaman Dr. King might have met on that windswept mountaintop.

The program follows appropriately with Barba’s title tune “Spirits.” A simple rising interval, extrapolated and harmonized, seems like a wisp of a theme, yet these men plumb its modality as if climbing the branches of a majestic tree. It stands like a spirit, inviting as it is inherently challenging for the earthbound.

Consequently the closing tune, “Sunset and the Mockingbird,” is also apt, from the pen of Duke Ellington, a timeless jazz presence. This is Duke’s indigo mood, and Barba proves he can fabricate a short story whole cloth from textured whole notes, while Breiwick is a mockingbird with genuine feelings. He evokes Ellington trumpeter Cootie Williams’ muted sorrow, as an elegy to whatever the sunset bade farewell, something to cherish, and live up to.

Spirits demonstrates extraordinary range and vision from this new jazz generation, and delivers on promise as if tapped into a musical wellspring flowing through their veins. -- Kevin Lynch

Lynch has written for Down Beat, The Village Voice, CODA, American Record Guide, The Chicago Tribune, The Milwaukee Journal and other publications, and blogs at Culture Currents (Vernaculars Speak).