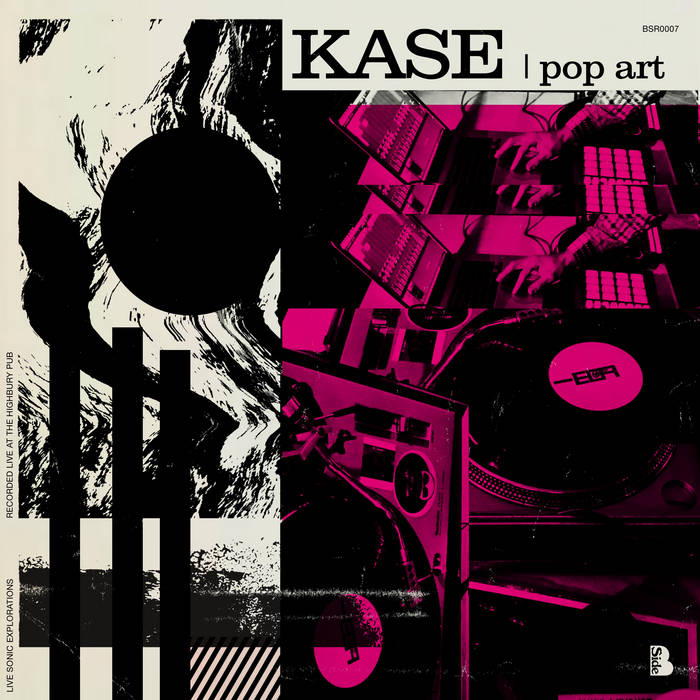 "On Pop Art, the experiment quickly takes on a remarkable fluidity. While exploring the decades-long affinity between jazz and hip-hop, everyone in KASE stretches into territory that sounds like neither."
-Scott Gordon, for Tone Madison

“...it’s with this experience KASE would find their flexibility and dexterity as a collective in electronic-infused jazz.”
Ben Slowey, for Breaking and Entering

This was the first time we made music together as KASE. The recording is extremely noisy, raw and unpolished – but it is a glimpse into the beginning of an almost two-year residency, ultimately shut down by the pandemic. You can tell we are not only "feeling it out" but also and most definitely feeling "it". I found these forgotten files on an old hard drive, and while not quite "studio quality" or maybe even "releasable" quality, I decided to just slide this one out there without too much ballyhoo. Why not? I couldn't think of a reason not to.

The SCENE: is The Highbury Pub in Bay View, WI. It is a cozy neighborhood haunt nestled amongst a number of restaurants, comic book shops, diners, wig stores and other Bay View oddities. If NYC has the Village or Chicago has Wicker Park, Milwaukee has Bay View – like those other places but smaller and grittier, probably drunker. As is typical of Wisconsin in the winter, the bar slowly filled in and got heated up as the night carried on. The tall windows steamed and dripped with condensation. In this setting we got the sense that experimentation was OK, simultaneously inside and outside the cultural mainstream. That's the point. Hip, without the 'ster. The crowd was mostly neighborhood folks, a few friends, and maybe a dog or two. Some were there for the music, some were there for the beer, some didn't know why they were there. A crowd in the back shouted "Suuuuuuuper Bowl!!!!", oddly in unison. They were most likely oblivious to the music being made. But that's ok. The overly massive painting of A Tribe Called Quest's "Low End Theory" cover faces the band and provided a steady reminder. By the end of the night, we were all friends.

The MUSIC: it developed through many twists and turns and obstacles and glitches and uncertainties over the course of the night. You can sense a direction forming and taking shape, as if being directed by gravity to a common point. knowsthetime (Ian Carroll) orchestrated the rhythms, textures and forms like a master conductor – all ears and reflexes. Ready to pivot and move in any direction or all directions at any time – all the time. Now's the time. He's not just a DJ, he's a drummer, a designer, a composer, a musician. John started the night out on electric bass, but quickly ditched it for the comfort, familiarity, depth, power and history of the upright bass... guttural, ancient and modern. Creatures of creativity exploring the space. For some reason, I brought a larger than normal setup: my trumpet run through a well-worn and squeaky Dunlop "Crybaby" pedal, a DOD delay and a 70's Fender Twin Reverb – more of a guitar setup. Like Miles, Hendrix is an early and important influence on me; not on my trumpet playing necessarily, but deep in my musical DNA.

“Don't think about making art, just get it done. Let everyone else decide if it's good or bad, whether they love it or hate it. While they are deciding, make even more art.”
― Andy Warhol